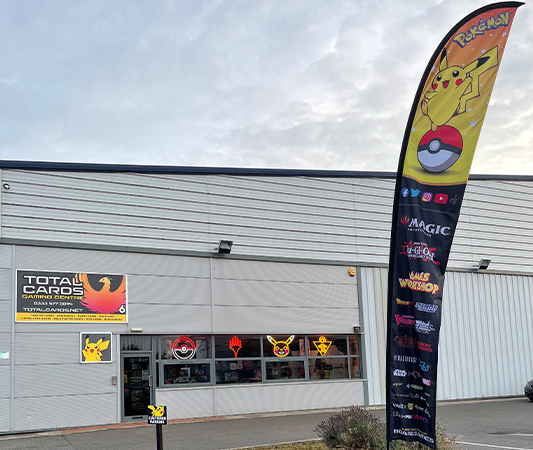 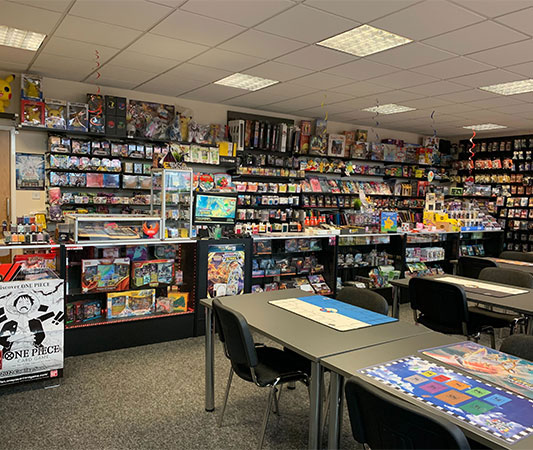 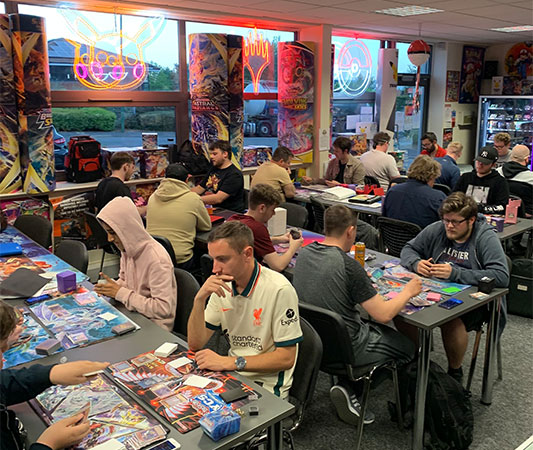 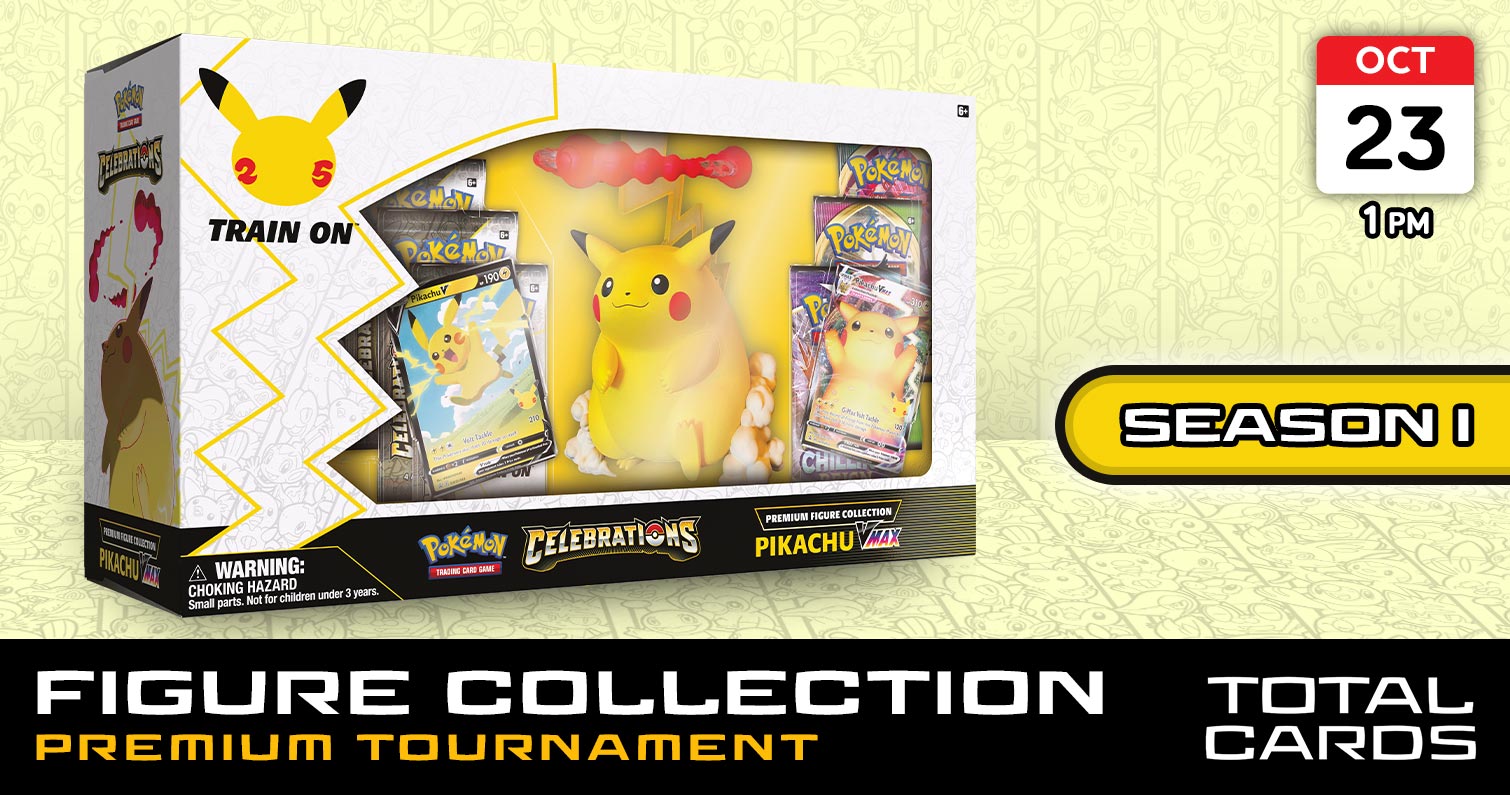 Welcome to the Total Cards Gaming Center, we’re super excited to bring you a brand new venture here at Total Cards! Over the years as we’ve served thousands of customers and we’ve noticed a very common request from you folks who live nearby... Somewhere to come and play!

Newton Aycliffe is now home to our very new and shiny and modern gaming space for you and your pals to come down and hang out and play some Pokemon, MTG, Board Games, Miniatures or to hang out with some reading material of your choice.

We can’t wait for everyone to come down and hang out with us and enjoy playing some of your favourite games, giving the previous year and the lock-down restrictions. We’ve certainly felt the struggle of getting opened and functional during the last year but now as we prepare to open our doors for you to bring your gang down for some hours of geeky fun!

We have free parking outside, free WiFi, and the world's best-stocked vending machine with way more awesome additions to come in the very near future. The best news is, it's completely free entry!!! 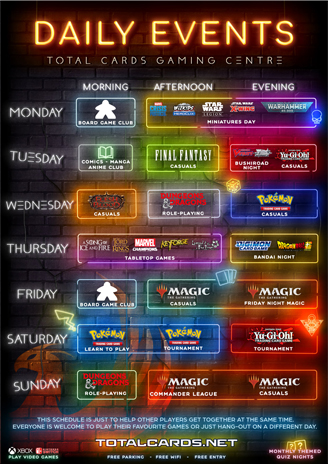 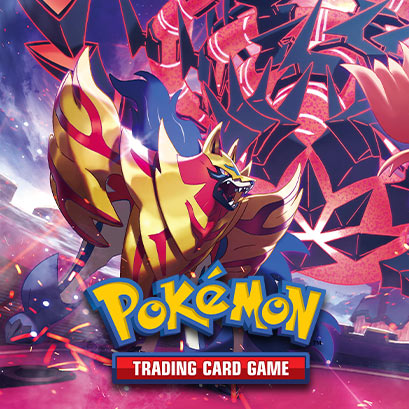 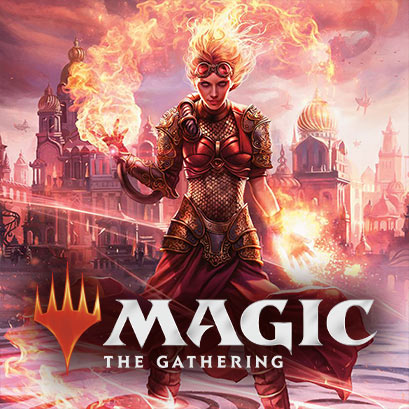 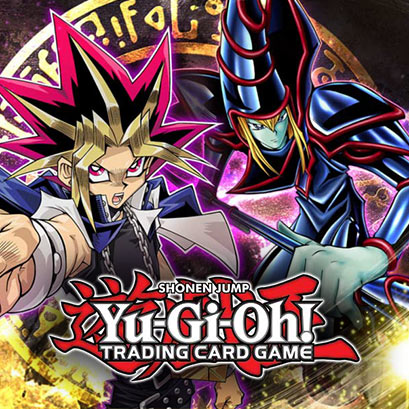 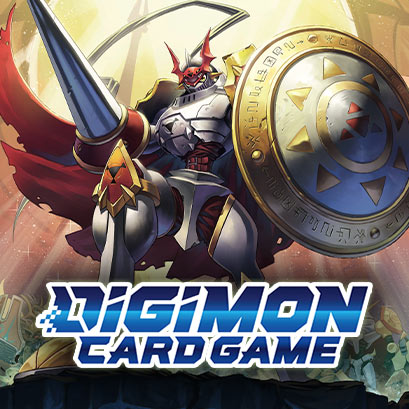 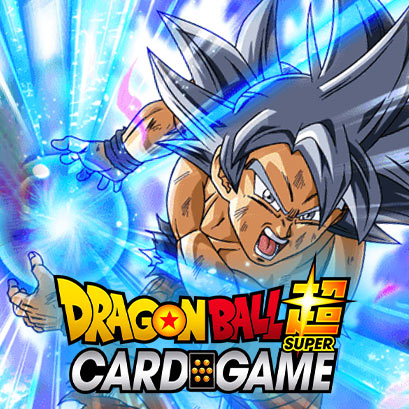 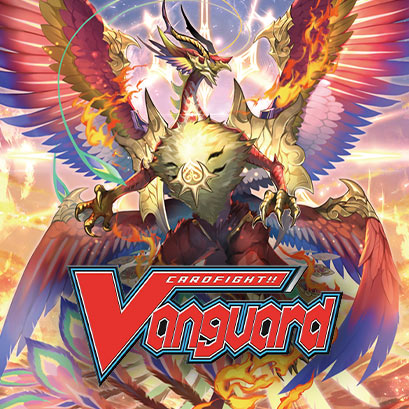 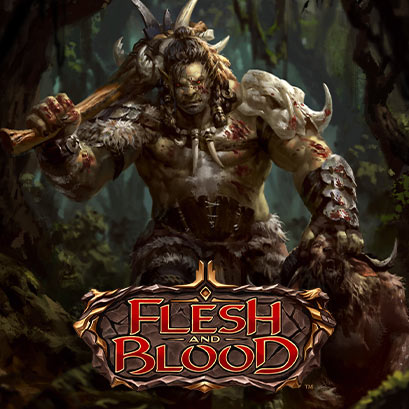 Where to find us!

If you're planning on making a visit to our Gaming Centre to play in an event, hang out with friends or to pick-up a store collection, we're located in the heart of County Durham. Our Gaming Center is super easy to find and is completly accessable using all modes of transport.

If you've never been to County Durham before you're not going to have any trouble finding us. We're located 3 mins away off the A1 Motorway! 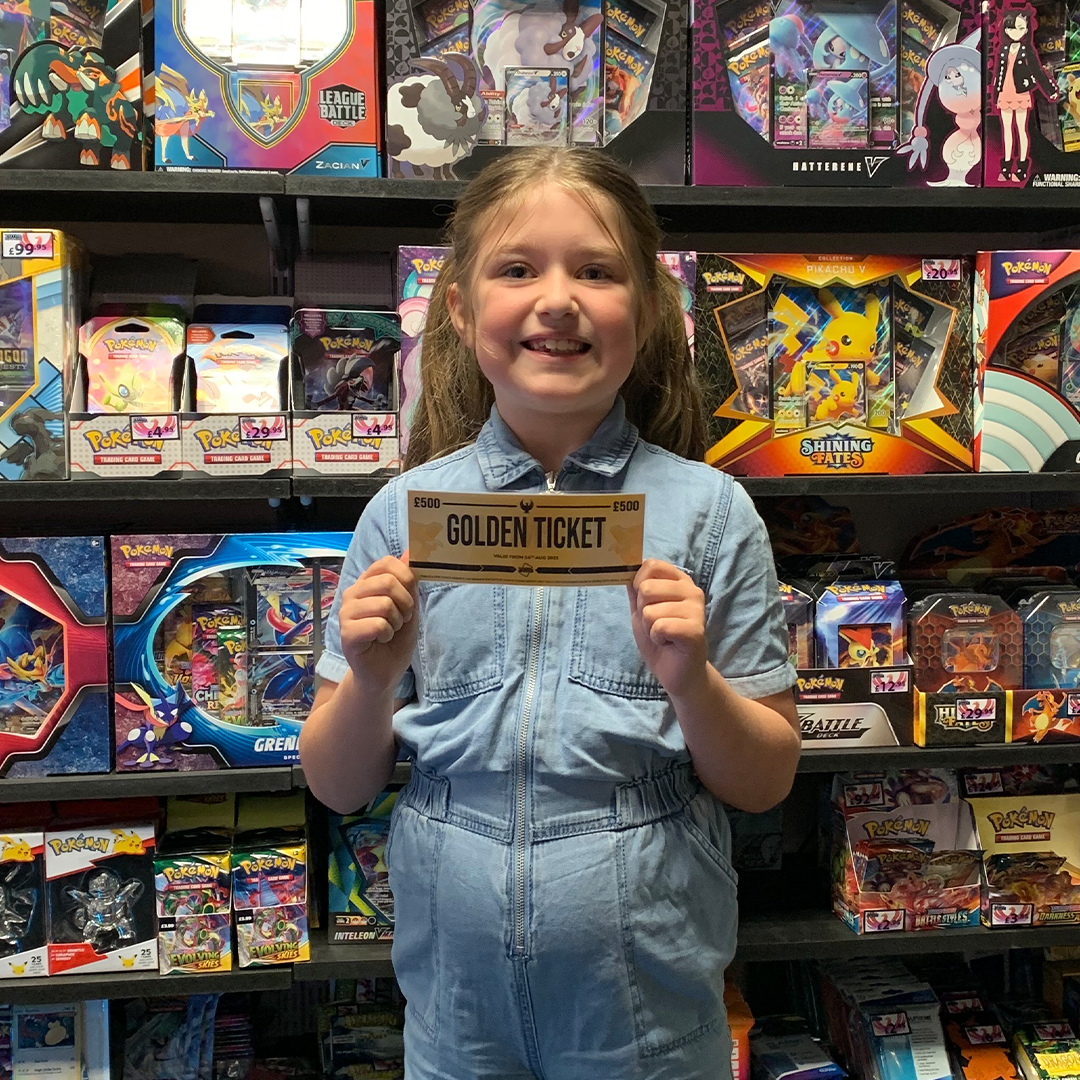 Congratulations to Brielle who won our Raffle for one of the coolest things we've given away, a £500 Golden Ticket! To celebrate the store opening, we offered anyone who played in our events would get put into a raffle for the Golden Ticket. This was a very cool event and we'll be looking to do more in the future!

Back to Duel September 2021 Winner

Congratulations to Adam who won our monthly Leaderboard for September and won an awesome Back to Duel Season 1 Playmat! Other players who participated were also awarded with mouse mats, field centres and of course OTS Booster Packs! 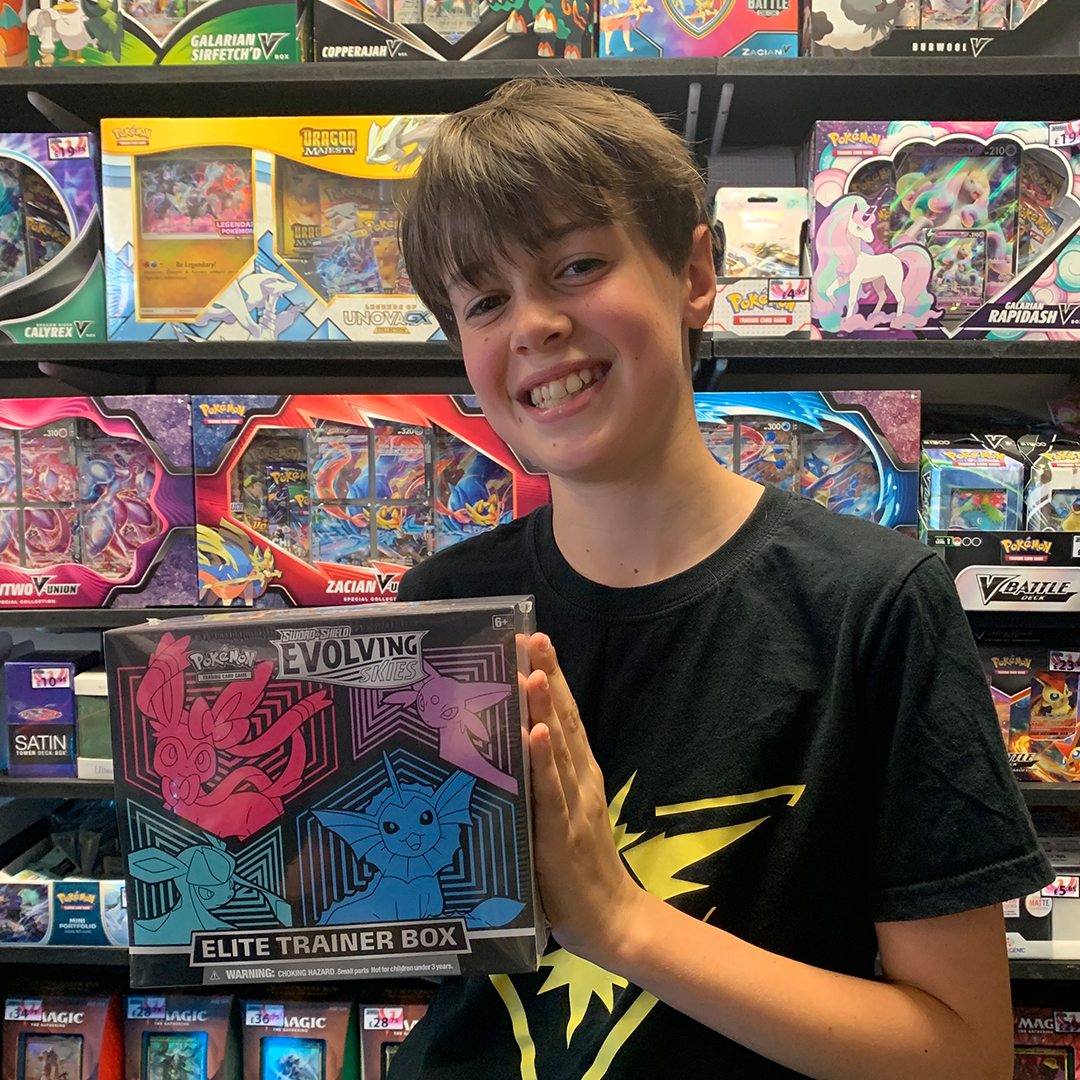 On the 25th of September, we held a Pokemon Win an ETB tournament. We had an amazing turnout and met so many amazing people. Finn was able to secure 1st Place with his insane Eternatus VMAX deck! 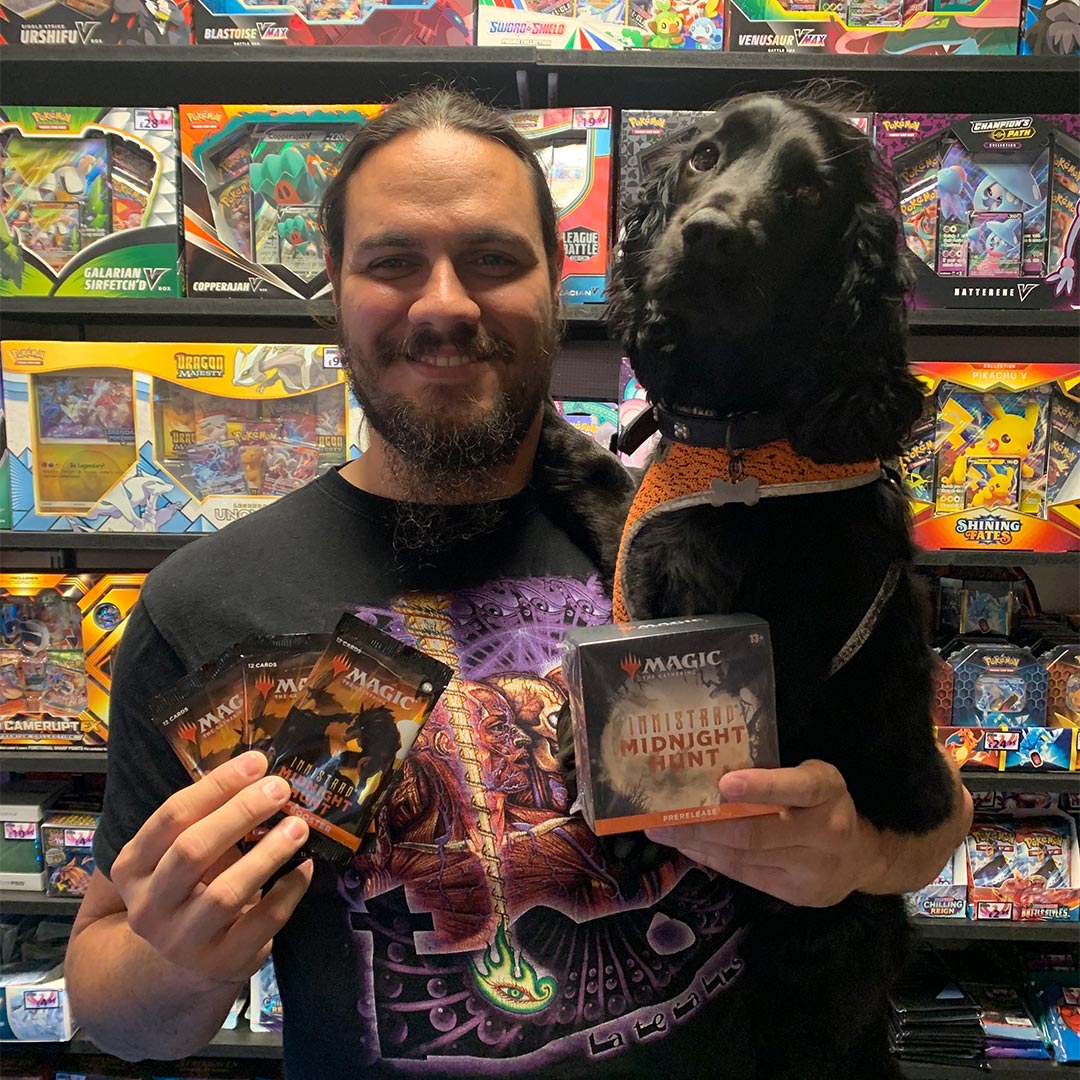 On the 19th of September, we held a MTG pre-release tournament. We had an amazing turnout and met so many amazing people. Miguel was able to secure 1st Place and win some additional booster packs, 1 week before the release! 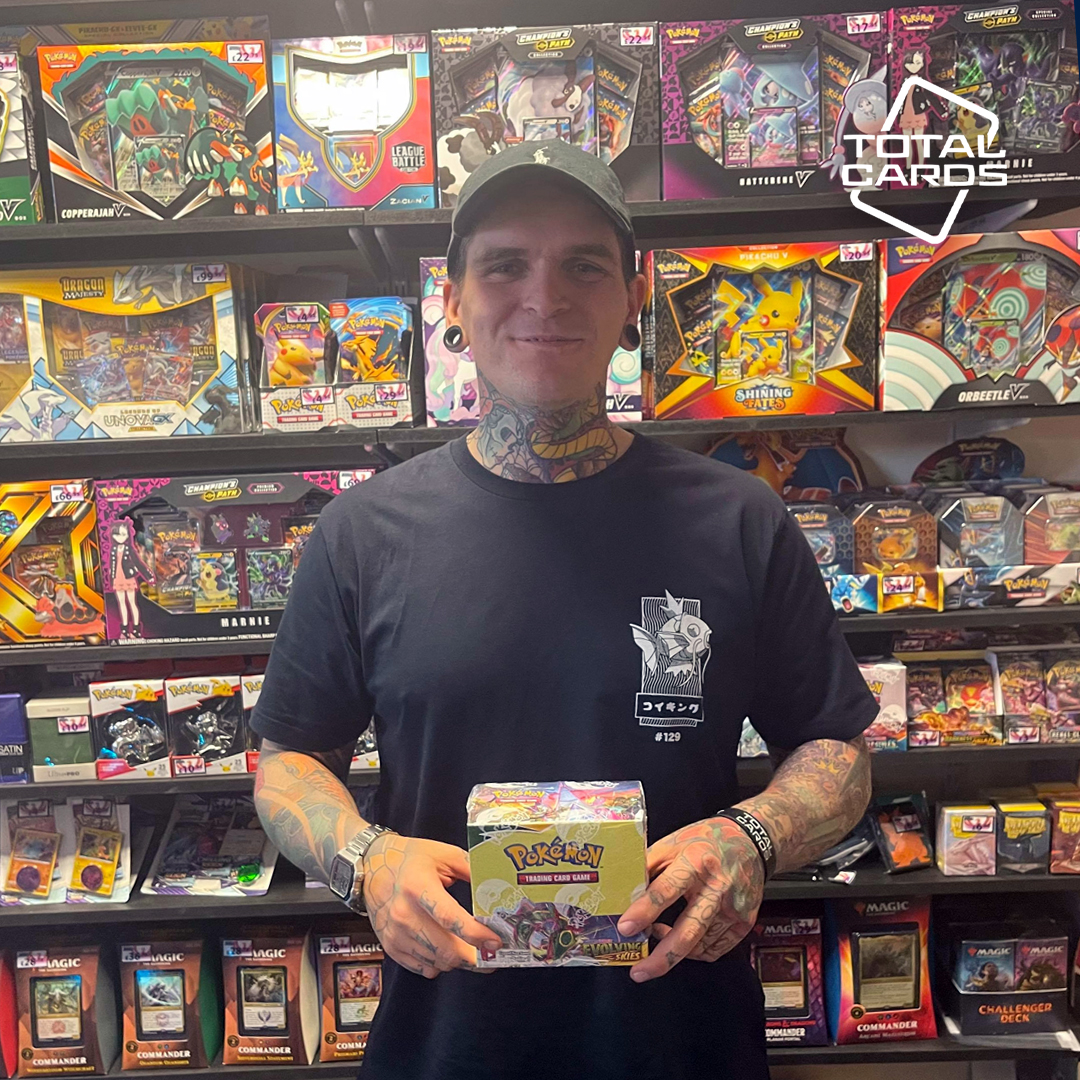 On the 11th of September, we held our very first Win a Box tournament for Pokemon. We had an amazing turnout and met so many amazing people. Sam was able to secure 1st Place and win the Booster Box! 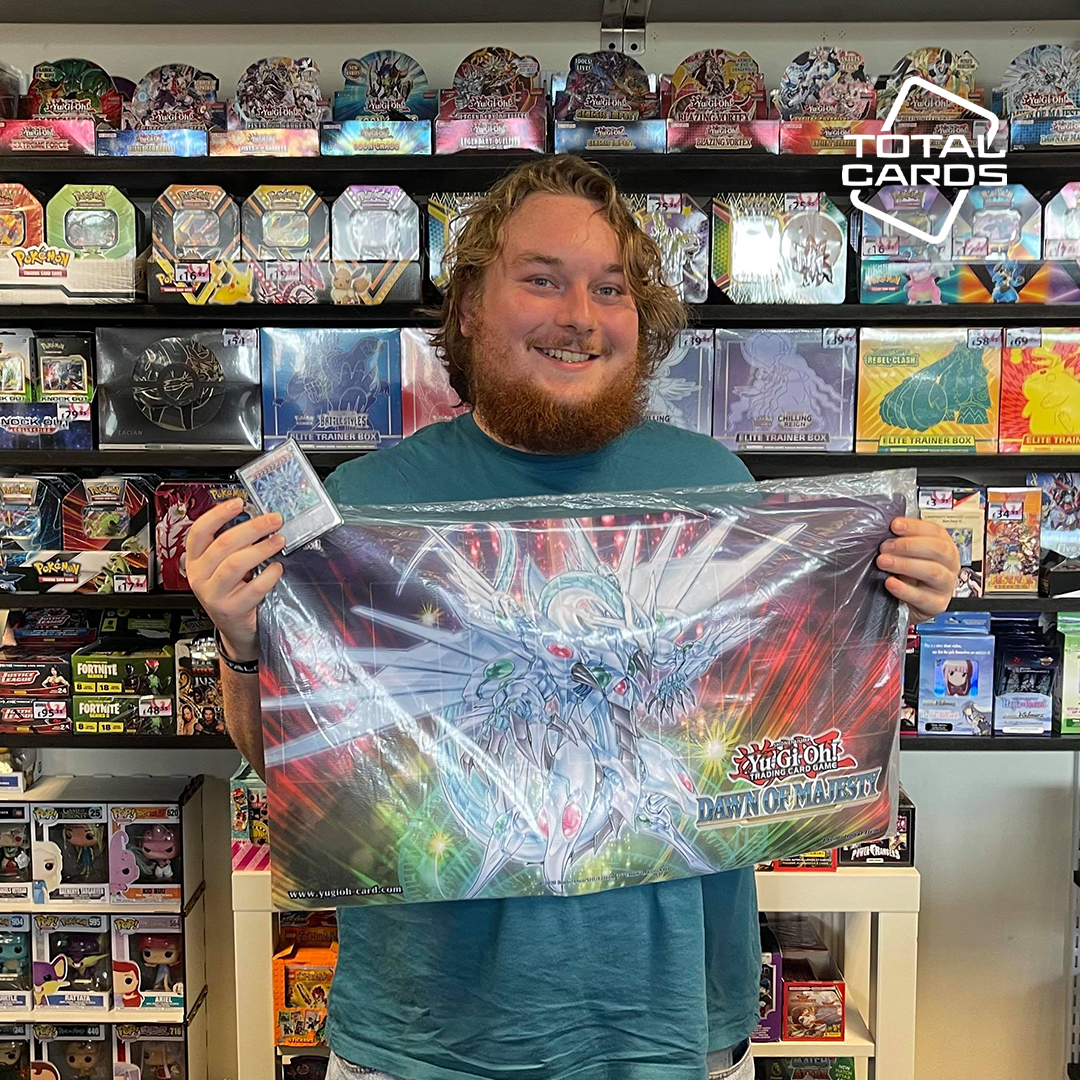 On the 8th of August, we held our first Yu-Gi-Oh Sneak Peek Event! Callum Stamper showed us why he is known as the Pendulum God... 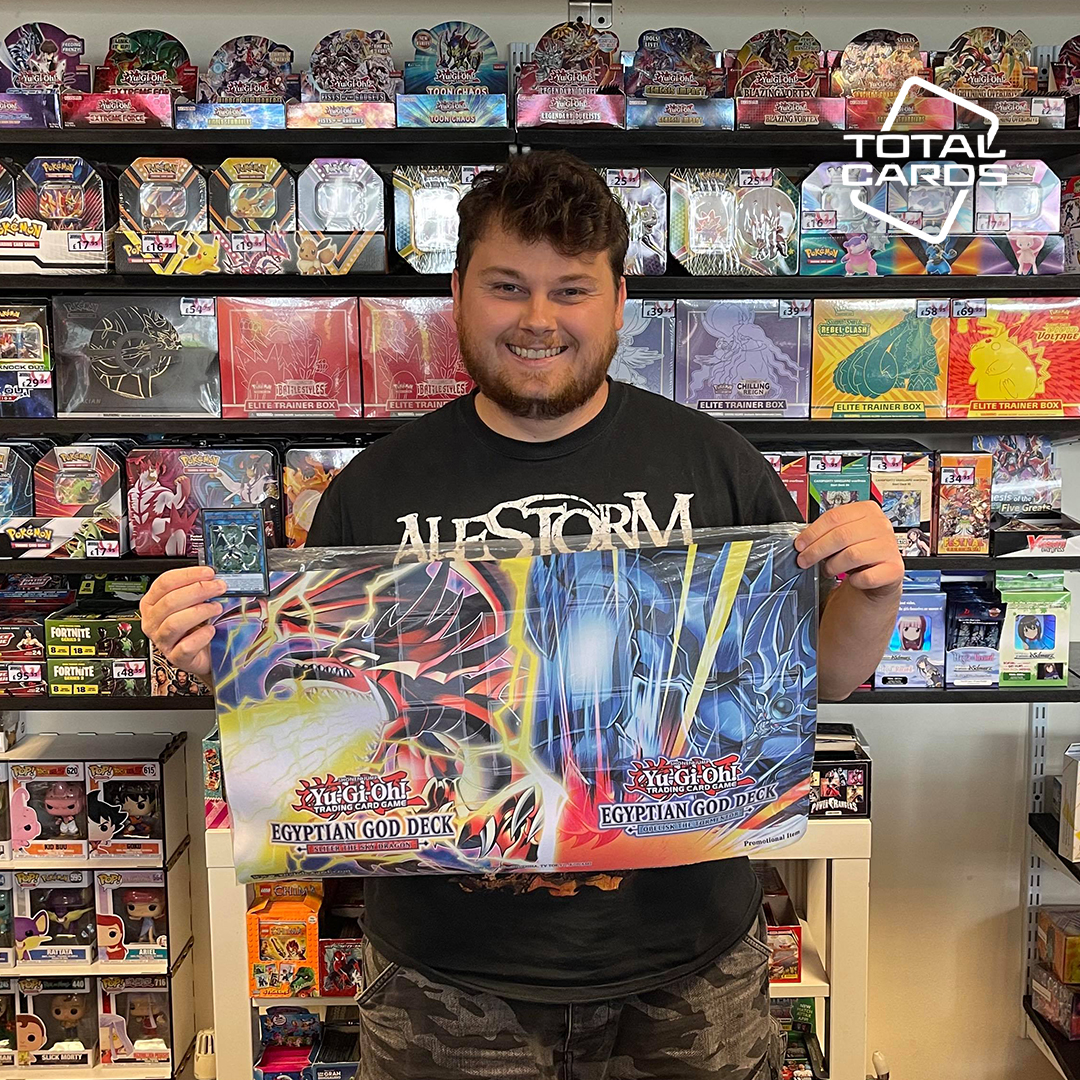 On the 2nd of August, we celebrated our first official in store Yu-Gi-Oh tournament! We decided to give away one one of the highly sought after, Egpyptian God Structure Deck Playmat! Ollie brought along his Tri-Brigade deck and dominated the competition by... 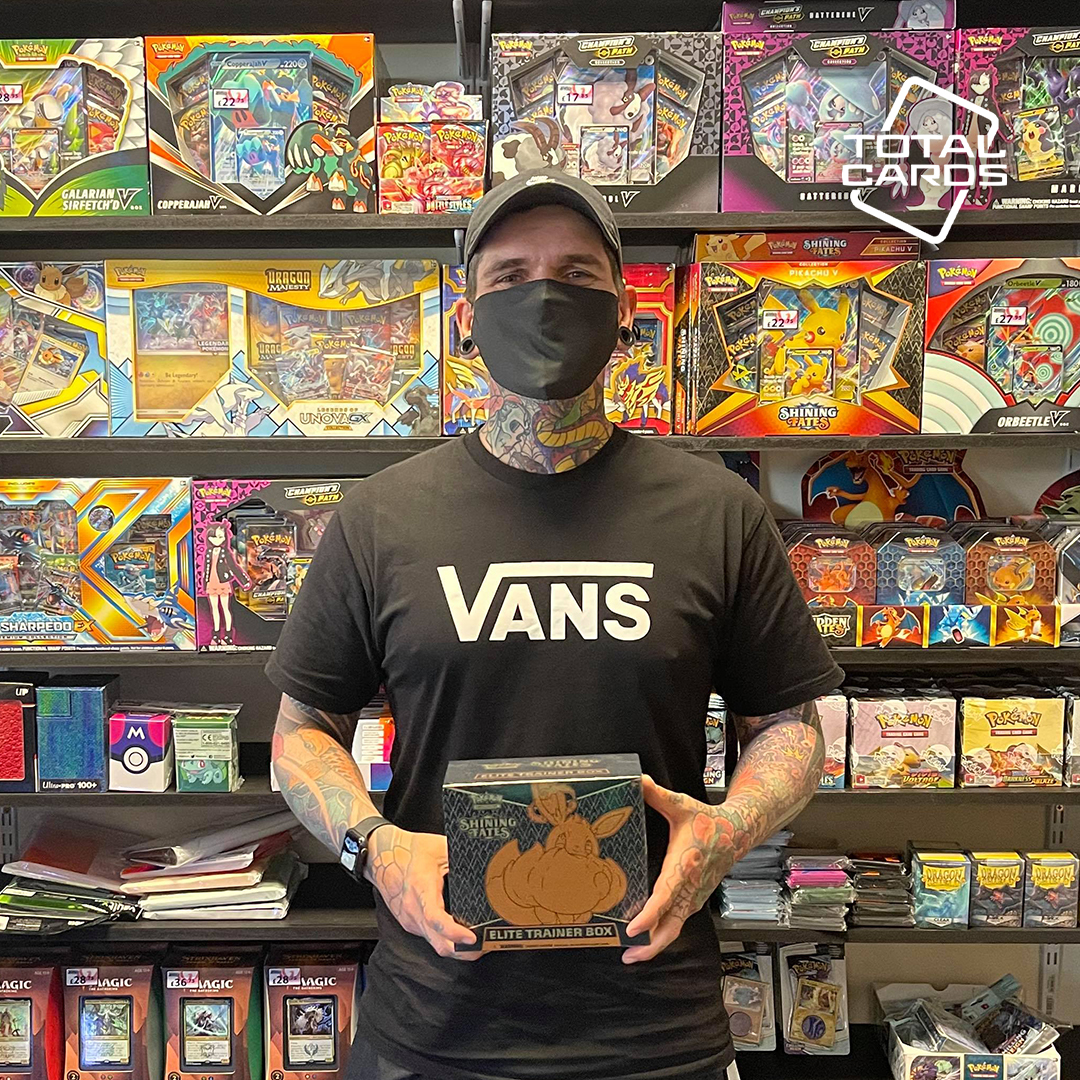 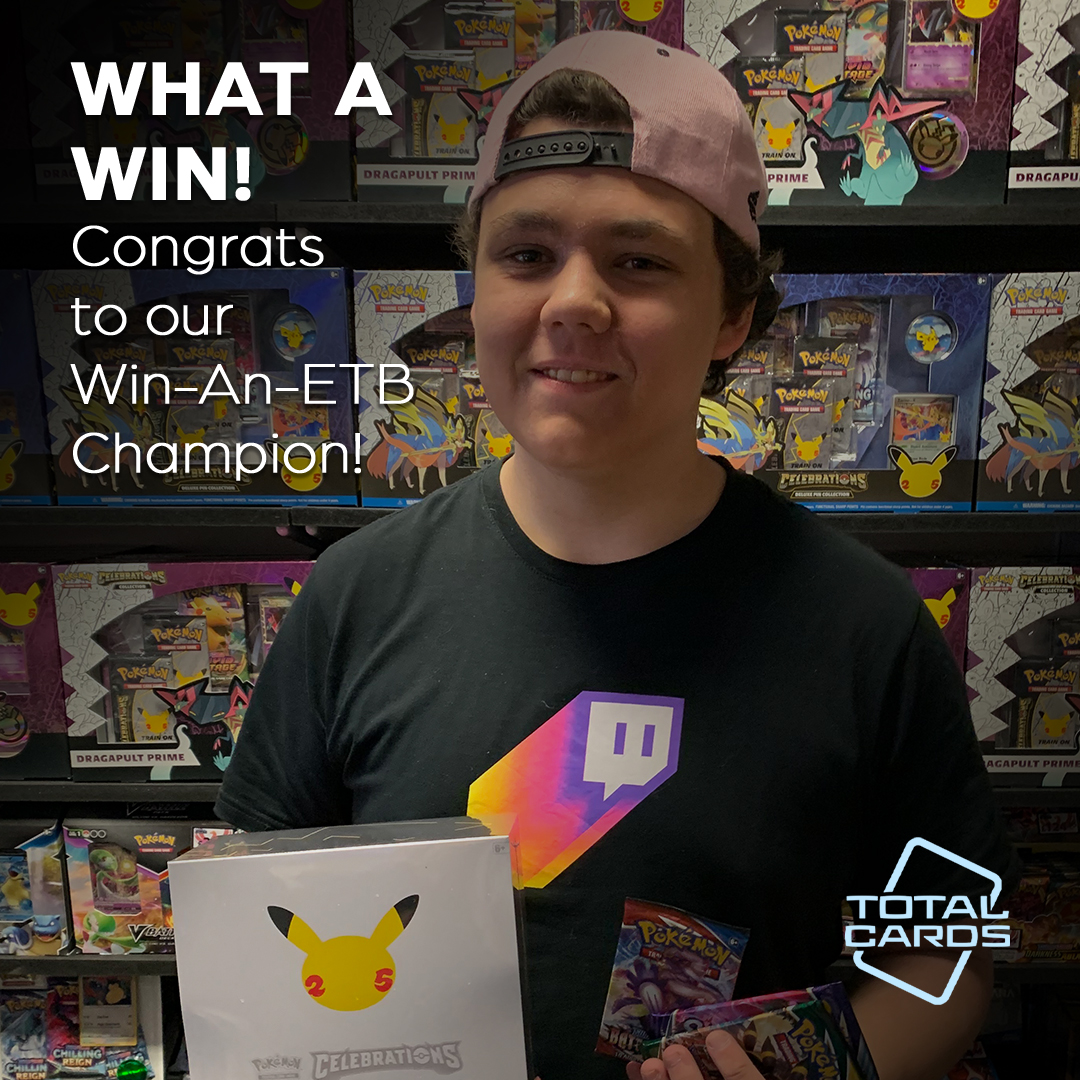 This Saturday, the Gaming Centre hosted our Win an Elite Trainer Box event! The turnout was great, especially since we hosted a Pokémon Movie viewing beforehand.

The atmosphere was electric, the battles were tense, but eventually Johnny emerged as the victor, piloting his faithful Single Strike Sylveon Box deck!

It was great so see such a diverse meta play out through the afternoon, congratulations on our winner Johnny who walked away from the event with prize packs and his very own Celebrations Elite Trainer Box!

The highly anticipated Golden Ticket raffle is finally over! Following one of our busiest Pokemon tournaments on Saturday the winner, Mike, was given the honour of choosing the winning ticket. The Gaming centre was buzzing, awaiting the big news of who had won, Adrian and Cameron checked the ticket and announced the winner with a booming smile! A huge congratulations to Kerri and her daughter Brielle, who after a great afternoon of gaming took away £500 in-store credit to spend!!

A massive thank you to everyone who came down over the past couple of months and entered themselves into our raffle! Whether it was to play in tournaments or make purchases, we had an absolute ton of you and it's been an absolute blast!! 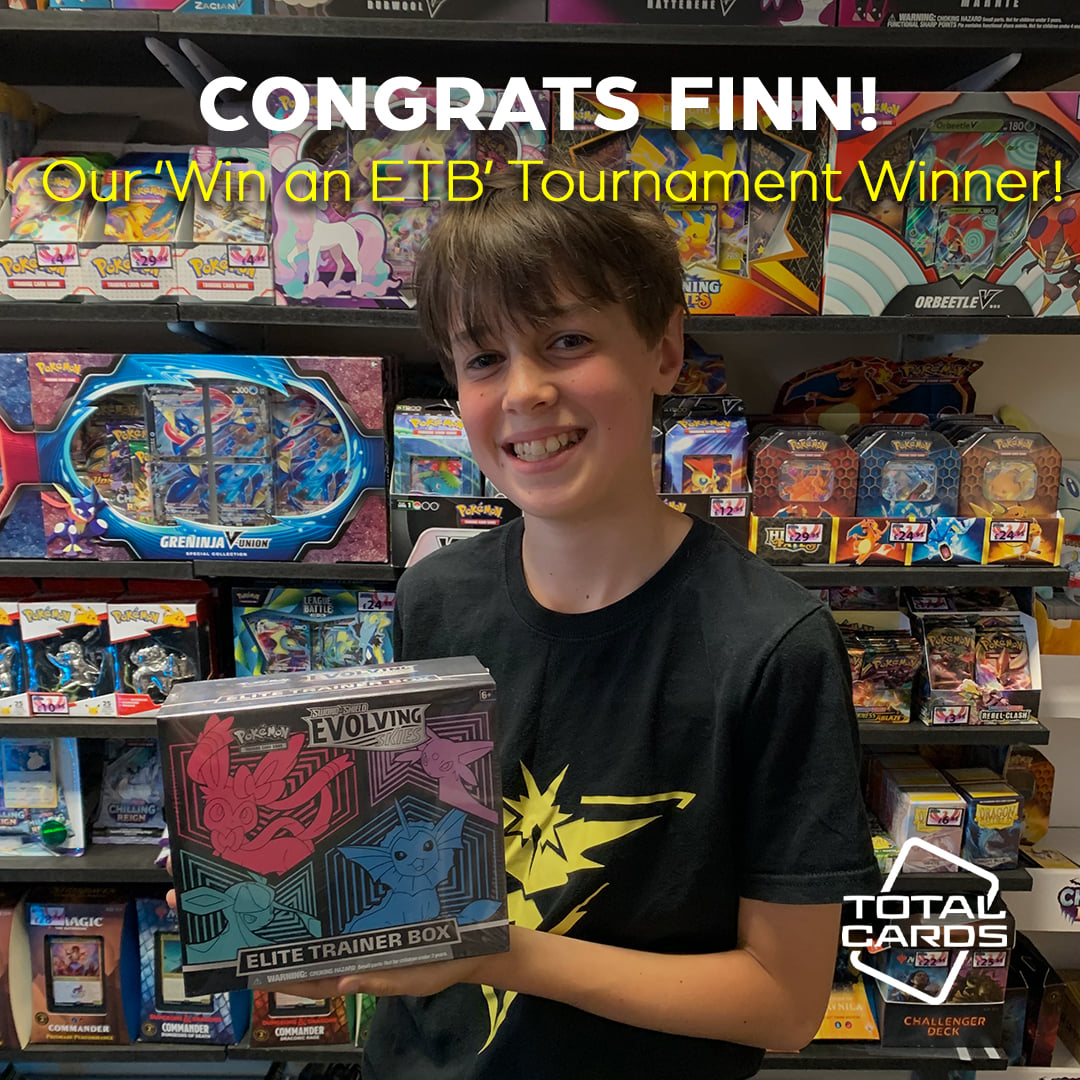 Last Saturday the Gaming Centre had a buzzing atmosphere as we hosted an exciting Pokémon TCG tournament! We had an amazing turnout, with a variety of people of all ages all battling together.

It was great to see all the combinations of decks from new players and experienced alike. We saw outstanding skill with the incredible Eternatus VMAX deck, the ever popular Inteleon VMAX deck and the first uses of the new V-Union cards!

The competition was intense so a massive congratulations to the winner, Finn, who was new to our Gaming Centre! He secured himself the new Evolving Skies Elite Trainer Box! In addition there were four lucky players who were selected at random and received a booster pack each. We have an excitement update that I'm sure all Magic the Gathering Players will be interested in! We now have some of these fan-favourite, foil, retro-frame promos available exclusively in store:

So how do you get these promo cards? These promo cards are available from attending our regular Magic the Gathering Events. These promos may also be given out as purchase incentives and for referring new players to the store. 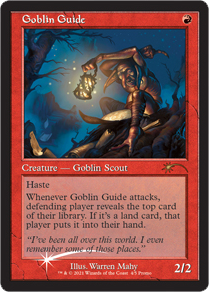 Creature — Goblin Scout
Haste
Whenever Goblin Guide attacks, defending player reveals the top card of their library. If it's a land card, that player puts it into their hand. 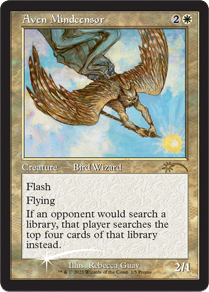 Creature — Bird Wizard
Flash
Flying
If an opponent would search a library, that player searches the top four cards of that library instead. 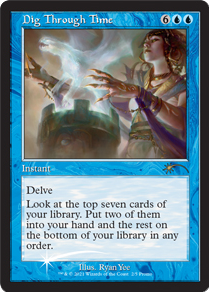 Instant
Delve (Each card you exile from your graveyard while casting this spell pays for .)
Look at the top seven cards of your library. Put two of them into your hand and the rest on the bottom of your library in any order. 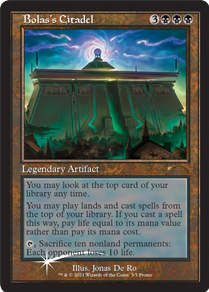 Legendary Artifact
You may look at the top card of your library any time.
You may play lands and cast spells from the top of your library. If you cast a spell this way, pay life equal to its converted mana cost rather than pay its mana cost.
Sacrifice ten nonland permanents: Each opponent loses 10 life. 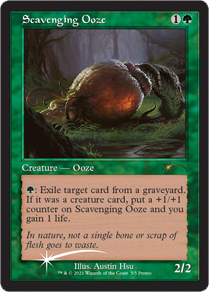 Creature — Ooze
Exile target card from a graveyard. If it was a creature card, put a +1/+1 counter on Scavenging Ooze and you gain 1 life.

We've got some of the most frequently asked questions we receive here at the Gaming Centre. 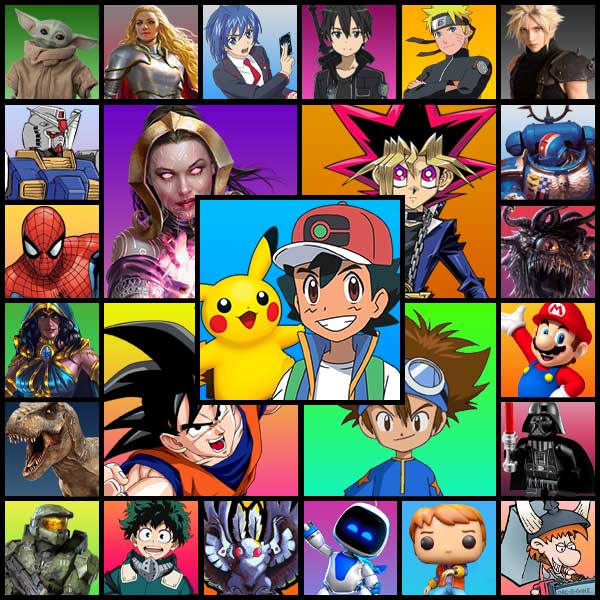